Origin and history of the Neapolitan Mastiff

The history of the Neapolitan Mastiff goes back thousands of years. It is believed that it was the Phoenicians who spread this breed throughout Europe. In the 5th century B.C., Julius Caesar found dogs of their description during his campaign in the British Isles. He took some Neapolitan mastiffs to Rome and, after the fall of the Roman Empire, the descendants of those dogs adopted the names of their places of residence.

At that time, dogs played a role as weapons of war. The protection of homes, where women and children remained, was also left to them. In circus shows, large dogs, such as the Neapolitan Mastiff, starred in fights with other beasts and animals.

Being a dog with such an ancient tradition, several official bloodlines have been recognized within the Neapolitan Mastiff family:

In addition, due to their early territorial expansion, they have generated the existence of Mastiffs of different origins. We can find breeds of English Mastiff, American Mastiff, Afghan Mastiff, Tibetan Mastiff, Kashmir Mastiff, Bullmastiff, Mastiff Spanish  and Great Mastiff.

The American Kennel Club recognizes several official colors for this breed: black, blue, mahogany and fawn. It may have a plain color throughout the body or have brindle markings. A gray Neapolitan Mastiff is only recognized as part of the breed if it is bluish. The same goes for the brown Neapolitan Mastiff, which has to be close to mahogany. The one we find most often represented in old pictures is the black Neapolitan Mastiff. 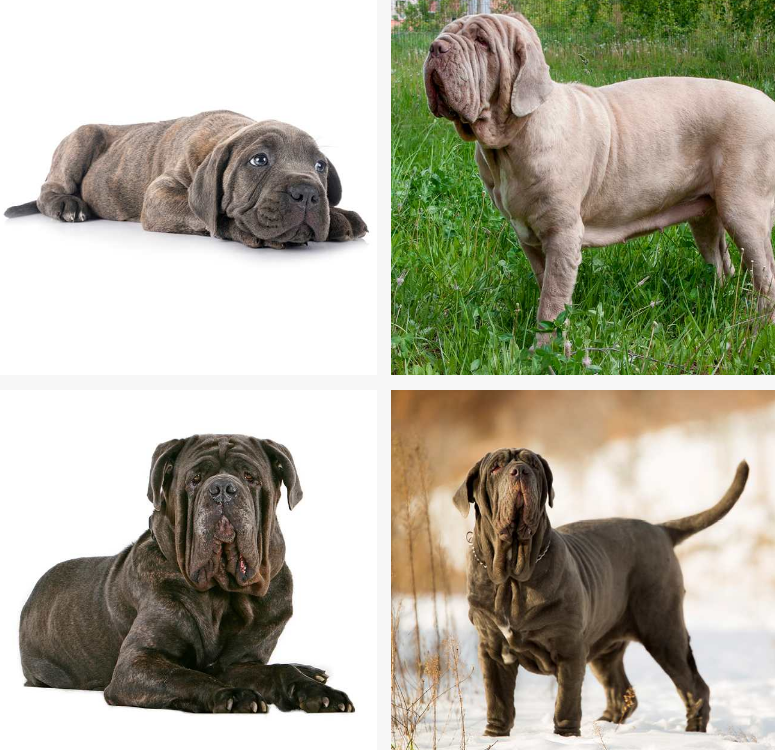 The Neapolitan Mastiff’s coat is short, harsh and especially dense. Its coat creates a layer that covers the large wrinkles that characterize it and protects it from inclement weather. Its coat is not remarkable compared to other physical characteristics of this breed, such as its head span.

The baby Neapolitan Mastiff is much calmer than its size would suggest. It is an especially homely puppy, which can be wary of strangers because of its characteristics as a watchdog. Proper socialization with other people and dogs from a very young age is essential for it to develop a proper character.

During this period, the baby Neapolitan Mastiff needs company, as it has a destructive tendency when faced with too much time alone. Companionship and affection are essential for the correct growth of the breed. Education and positive training are essential for this breed to grow freely and fully develop. The games de intelligence  The training is recommended to favor its physical and intellectual development.

The Neapolitan Mastiff dog has a strong, independent, loyal and cautious temperament. It is an animal that likes to stay at home and is naturally distrustful of outsiders. His behavior with others will depend on the socialization we have given him in his puppyhood.

It is not prone to bark unnecessarily and is not inclined towards physical activity as other breeds of this size can be. The Neapolitan Mastiff may not be fully aware of its size, so we must keep an eye on it in the presence of children, people outside the house and other animals, even if our companion is sociable. We must take into account that it is a dog prone to drooling.

This breed of dog is not known to have serious diseases that are genetically transmitted. It is generally a fairly hardy dog. A minor condition that can occur in the Neapolitan Mastiff is “cherry eye”, which is characterized by redness and swelling of the eye tissue.

We also have to take into account the typical diseases of large dogs. Joint problems develop quite frequently and hip dysplasia is the most common. Stomach torsion is also common in large dogs. Keeping food in a high bowl and not feeding before or after strenuous physical activity will prevent this from happening.

Typical care of the breed

The Neapolitan Mastiff is not a dog that needs an intense physical activity routine, but its size requires daily movement. It is not advisable to walk him at a high pace. Adapting to his pace and going for long walks is the best option to keep him in shape. His favorite activity (and that of his joints) will be swimming, as it allows him to exercise without feeling the weight of his body.

A weekly brushing with a brushing proper  brushing will be enough to keep the Neapolitan Mastiff’s coat healthy and cared for. They do not tend to accumulate hair nor do they have a double coat, so they do not need special care in this area. During the hot months, we should avoid taking them out in high temperatures.

The skin of Neapolitan Mastiffs is particularly tough and resistant. Moisturizing will be especially important during the summer to avoid dry skin. The large folds that characterize these dogs should be checked at this time because the accumulation of sweat can cause eczema or chafing.

Weekly eye and ear examinations are essential to ensure the health of the Neapolitan Mastiff, as with any other dog. A routine hygiene routine using the products necessary  prevents the onset of infections and alerts us to any changes to prevent more serious problems.

What is the best diet for the Neapolitan Mastiff?

This breed of dog needs a diet adapted to the different stages of its life. Although a staged feeding is the most advisable in the case of any breed of dog, in the Neapolitan Mastiff and the rest of the breeds, it is essential. dogs de breed  large  it is essential. In this way, their growth is controlled according to their needs and many problems related to their joints are avoided.

The Neapolitan Mastiff needs to be fed several times during the day with a food designed for large breed puppies. At this stage a quality and balanced diet is very important to control their growth. Their developing bones are not yet ready to support too much weight all at once, so this food is designed to help them grow in a controlled way, with food slightly high in fat and low in protein.

In its adult stage, the Neapolitan Mastiff may need to eat up to 1kg of food daily. Feedings may be divided in two during the day, although this may depend on the specific needs of each dog and its routine. Your veterinarian may recommend the use of chondroprotectors to protect their joint health, although, according to the American Kennel Club, we should avoid those containing calcium.

The senior Neapolitan Mastiff needs low-fat food to avoid becoming overweight. As they are not noted for their physical activity, the risk of weight gain at this stage is multiplied. Supplementing dry food with wet food, especially in the summer months, will help their hydration and will be gentle on their teeth.

Adoption of a Neapolitan Mastiff

If after knowing all these details you are considering the adoption of a Neapolitan Mastiff, we recommend you to use the app from Amazdog. Through this platform, you will be able to consult the profiles of different dogs from animal shelters all over Spain. There you can find the Neapolitan Mastiff dog that will become your new life companion.

Dogs 0
The education of our dog begins at an early age. The earlier he starts, the easier

Dogs 0
Ticks are small parasites that lodge in the skin of dogs, feeding on their

Dogs 0
Do you know how often dogs should be dewormed? Deworming is a very important preventive

Dogs 0
Municipalities are increasingly providing more and more areas for dogs. These are fenced areas

Dogs 0
Do you want to know the advantages of sterilizing a puppy? Sterilization consists of annulling fertility,
Leave a Reply Cancel reply
Recent Posts
Categories
Pages